For the past year or so I’ve been teaching myself electronics. There have been a series of events that have moved me down this path. I had a software interview at a company that works in the embedded electronics space. My friend Demi Raven, who is a wonderful artist and person, bye the way, works there and thought I’d be a good fit. Turns out my interview skills were a bit rusty. I didn’t get the job. After the rejection I was inspired and fascinated with writing software that interacts directly with the real physical world. I went out and bought and read “Write Great Code” volumes 1 & 2. I also read  Make: Electronics (Learning by Discovery), Getting Started in Electronics & Forrest Mims Engineer’s Notebook. I am currently reading The Art of Electronics. It is fairly math oriented but I’m working my way through. The books and many internet resources have been great aids in developing as set of mental tools for me.

Without going into detail, I have been working on the software end (mostly) of and embedded system @ my current place of employment. Writing drivers for custom hardware is definitely interesting. Working with electrical engineers reminds me of when I first started working in software. I can understand enough to keep the EE talking and just try to pick up as much as possible.

I also have a few projects in the works. 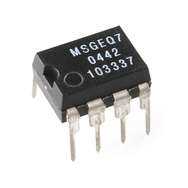 For my first project I decided to create a light organ that can be used in the heavy metal opera company I am involved with. My initial design used MIDI from a keyboard. I was unable to get it to perform well enough to show all of the notes played. I then found an IC that I thought might work well. It is the MSGEQ7. I bought a bunch from Sparkfun.com just in case I fried some. The work fairly well, but as I added resistance based components I found there was a large amount of noise coming out of the MSGEQ7. I also found that harmonics would crop up away from the fundamental frequency. For example playing a very low frequency note like E0 would still produce frequencies in the higher ranges like 16kHz. I decided to use an exponential curve to dampen both the noise (capacitors helped as well) and make the fundamental frequencies more prominent.

I have many other projects up in the air and a few completed. I will write up a few here when I can get to it.

I have spent a good amount of time watching YouTube videos from Dave Jones, from the EEVblog, Mike, from Mike’s Electric Stuff, Jeremy Blum, and a bunch of other people who are much smarter than me. I have a long way to go but I am enjoying the journey.

This site uses Akismet to reduce spam. Learn how your comment data is processed.